Physical Therapy in Port Townsend for Lower Back 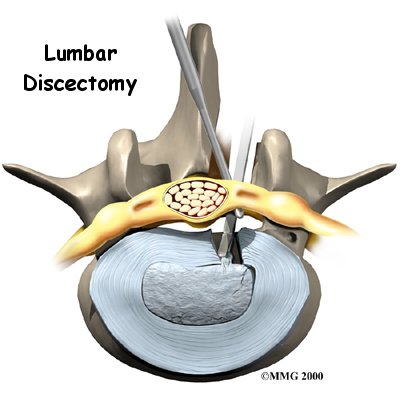 Welcome to Sanctuary for the Physical Arts patient resource about from Lumbar Discectomy.

This article will help you understand:

What parts of the spine and low back are involved?

Surgeons perform lumbar discectomy surgery through an incision in the low back. This area is known as the posterior region of the low back. The main structure involved is the intervertebral disc, which acts as a cushion between each pair of vertebrae. The two main parts of the disc are the annulus and the nucleus. The lamina bone forms the protective covering over the back of the spinal cord. During surgery, this section of bone is removed over the problem disc. The surgeon also checks the spinal nerves where they travel from the spinal canal through the neural foramina. The neural foramina are small openings on each side of the vertebra. Nerves that leave the spine go through the foramina, one on the left and one on the right.

What do surgeons hope to achieve?

Lumbar discectomy can alleviate symptoms from a herniated disc in the low back. The main goal of discectomy surgery is to remove the part of the disc that is putting pressure on a spinal nerve root. Taking out the injured portion of the disc also reduces chances that the disc will herniate again.

These goals can be achieved using a traditional procedure, called laminotomy and discectomy, or with a newer method called microdiscectomy. The traditional method requires a larger incision and tends to require a longer time to heal.

Microdiscectomy is becoming the standard surgery for lumbar disc herniation. Since the surgeon performs the operation with a surgical microscope, he or she needs to make only a very small incision in the low back. Categorized as minimally invasive surgery, this surgery is thought to be less taxing on patients. Advocates also believe that this type of surgery is easier to perform, prevents scarring around the nerves and joints, and helps patients recover more quickly.

How will I prepare for surgery?

The decision to proceed with surgery must be made jointly by you and your surgeon. You should understand as much about the procedure as possible. If you have concerns or questions, you should talk to your surgeon.

Once you decide on surgery, your surgeon may suggest a complete physical examination by your regular doctor. This exam helps ensure that you are in the best possible condition to undergo the operation.

On the day of your surgery, you will probably be admitted to the hospital early in the morning. You shouldn't eat or drink anything after midnight the night before.

What happens during the operation?

Patients are given a general anesthesia to put them to sleep during most spine surgeries. As you sleep, your breathing may be assisted with a ventilator. A ventilator is a device that controls and monitors the flow of air to the lungs.

Some surgeons have begun using spinal anesthesia in place of general anesthesia. Spinal anesthesia is injected in the low back into the space around the spinal cord. This numbs the spine and lower limbs. Patients are also given medicine to keep them sedated during the procedure.

Discectomy surgery is usually done with the patient kneeling face down in a special frame. The frame supports the patient so the abdomen is relaxed and free of pressure. This position lessens blood loss during surgery and gives the surgeon more room to work.

The two main discectomy procedures are

Laminotomy and discectomy is the traditional method of removing the disc. Laminotomy is taking off part of the lamina bone (the back of the ring over the spinal canal). This allows greater room for the surgeon to take out part of the disc (discectomy).

An incision is made down the middle of the low back. After separating the tissues to expose the bones along the low back, the surgeon takes an X-ray to make sure that the procedure is being performed on the correct disc. A cutting tool is used to remove a small section of the lamina bone. 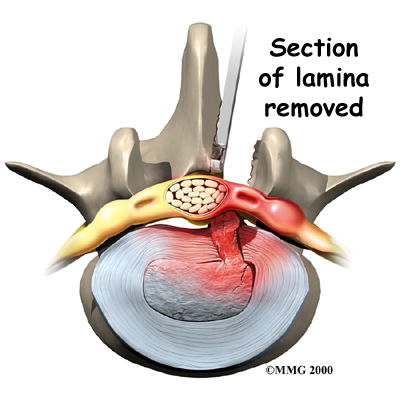 Next, the surgeon cuts a small opening in the ligamentum flavum, the long ligament between the lamina and the spinal cord. This exposes the nerves inside the spinal canal. The painful nerve root is gently moved aside so the injured disc can be examined. A hole is cut in the outside rim of the disc. Forceps are placed inside the hole in order to clean out disc material within the disc. Then the surgeon carefully looks inside and outside the disc space to locate and remove any additional disc fragments.

Finally, the nerve root is checked for tension. If it doesn't move freely, the surgeon may cut a larger opening in the neural foramen, the nerve passage between the vertebrae.

Before closing and suturing the wound, some surgeons will implant a special foam pad or a piece of fat over the nerve root to keep scar tissue from growing onto the nerve. Some surgeons also insert a small drain tube in the wound.

The surgeon performs microdiscectomy using a surgical microscope. A two-inch incision is made in the low back directly over the problem disc. The skin and soft tissues are separated to expose the bones along the back of the spine. An X-ray of the low back is taken to ensure the surgeon works on the right disc.

Next, the annulus (outer ring) of the disc is sliced open. Material from inside the disc is scooped out to ensure the disc doesn't herniate again. Since only the injured portion is removed, the disc is left intact and functioning. Then the surgeon inspects the area around the nerve root and removes any loose disc fragments. Finally, the nerve root is gently wiggled to make sure it is free to move. If it can't move, the surgeon also cleans around the neural foramen, the nerve passage between the two vertebrae. When the nerve moves freely, the muscles and soft tissues are put back in place, and the skin is stitched together.

As with all major surgical procedures, complications can occur. Some of the most common complications following lumbar discectomy include:

This is not intended to be a complete list of possible complications.

Problems can arise when the anesthesia given during surgery causes a reaction with other drugs the patient is taking. In rare cases, a patient may have problems with the anesthesia itself. In addition, anesthesia can affect lung function because the lungs don't expand as well while a person is under anesthesia. Be sure to discuss the risks and your concerns with your anesthesiologist.

Thrombophlebitis, sometimes called deep venous thrombosis (DVT), can occur after any operation. It occurs when the blood in the large veins of the leg forms blood clots. This may cause the leg to swell and become warm to the touch and painful. If the blood clots in the veins break apart, they can travel to the lung, where they lodge in the capillaries and cut off the blood supply to a portion of the lung. This is called a pulmonary embolism. (Pulmonary means lung, and embolism refers to a fragment of something traveling through the vascular system.) Most surgeons take preventing DVT very seriously. There are many ways to reduce the risk of DVT, but probably the most effective is getting you moving as soon as possible. Two other commonly used preventative measures include:

Infection following spine surgery is rare but can be a very serious complication. Some infections may show up early, even before you leave the hospital. Infections on the skin's surface usually go away with antibiotics. Deeper infections that spread into the bones and soft tissues of the spine are harder to treat. They may require additional surgery to treat the infected portion of the spine. 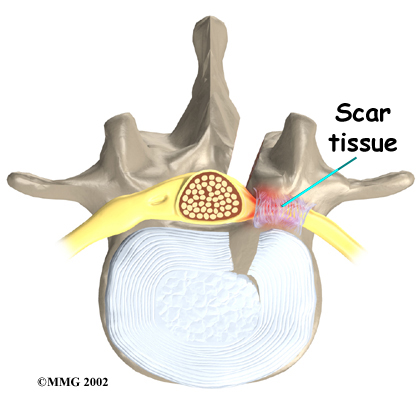 Discectomy is especially helpful for patients whose main complaint before surgery is leg pain. When back pain has been the main complaint, however, surgical results vary. If the pain continues after surgery or becomes unbearable, talk to your surgeon about treatments that can help control your pain.

What happens after surgery?

Patients are usually able to get out of bed within a few hours after surgery. However, you will be instructed to move your back only carefully and comfortably. The drain tube is normally taken out the day after surgery. Patients are able to return home when their medical condition is stable.

Most patients leave the hospital the day after surgery. They are usually safe to drive within a week or two. Bending and lifting should be avoided for four to six weeks. People generally get back to light work in two to four weeks and can do heavier work and sports within two to three months. Workers whose jobs involve strenuous manual labor may be counseled to consider a less strenuous job.

What should I expect as I recover?

Many surgeons prescribe outpatient Physical Therapy within three weeks after surgery. Although the time required for recovery varies, Physical Therapy at Sanctuary for the Physical Arts after lumbar discectomy is generally only needed for six to eight weeks. You should expect full recovery to take up to four months.

At first, our Physical Therapy sessions will focus on controlling pain and inflammation. Ice and electrical stimulation treatments are commonly used to help with these goals. Our Physical Therapist may also use massage and other hands-on techniques to ease muscle spasm and pain.

We will slowly add active treatments to your rehabilitation program. These include exercises for improving heart and lung function. Walking and swimming are ideal cardiovascular exercises after this type of surgery. Our Physical Therapists also teach specific exercises to help tone and control the muscles that stabilize the low back.

Our Physical Therapist will work with you on how to move and do activities. This form of treatment, called body mechanics, helps you develop new movement habits. Training in body mechanics helps you keep your back in safe positions as you go about your work and daily activities. At first, this may be as simple as learning how to move safely and easily in and out of bed, how to get dressed and undressed, and how to do some of your routine activities. Then we will instruct you on how to keep your back safe while you lift and carry items and as you begin to do more strenuous activities.

Sanctuary for the Physical Arts provides services for Physical Therapy in Port Townsend.